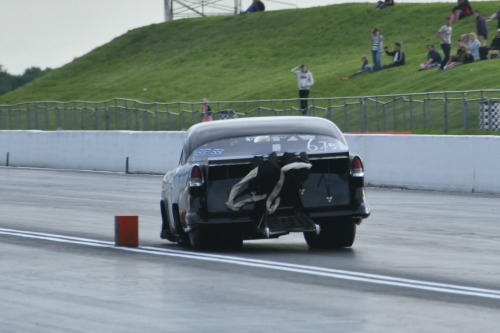 Timing blocks are a key component in drag racing, enabling accurate timings for all vehicles and races taking place at Santa Pod. Made from foam, the timing blocks are glued at intervals to the centreline of the track. These foam blocks house reflectors, which are an integral part of the timing systems that record the times and speeds of the cars and bikes that travel down the famous ¼ mile strip.

The foam timing blocks are regularly hit by vehicles during races. Although they are only made from foam, the fastest vehicles typically cross the finish line at speeds in excess of 300 miles per hour. Hitting the blocks at this speed with a carbon fibre bodied race car means that damage could be catastrophic, especially with the foam block glued to the floor, collisions cause plenty of damage to the vehicles.

The toll that the collisions were taking on the expensive, privately owned, machinery was causing a degree of frustration in the pits amongst the top drivers. This has been an ever present problem for drag racers, and Santa Pod were keen to overcome the problem by developing a solution that would not only enable accurate timings, but also minimise the expensive damage that was caused when cars collided with the timing blocks.

The foam blocks were fixed to floor using a glue mastic adhesive, a strong bonding agent developed by Santa Pod to securely attach the foam blocks to the track. Unfortunately, the sheer point of the glue allowed very little give when there was a collision, and when cars collided with the blocks, significant damage was caused to the vehicles.

Such a specialist application obviously required some thought. The method of fixing the foam blocks to the track needed to be strong enough to withstand the “aero wash” from a car passing close by at high speed, but the sheer point needed to be low enough to prevent damage to cars should they hit the obstacle head on. After much consideration, the idea of using magnets was suggested by the team at Santa Pod. The magnet itself needed to be very lightweight and flexible so as not to cause damage during a collision. Standard rare earth neodymium disk magnets could not be used due to the health and safety risk; collisions could result in the disk shaped magnets becoming loose and potential injuring drivers, spectators and cars in the event of a crash.

Santa Pod Raceway originally tested a standard flexible magnetic rubber, which consisted of ferrite magnet powder dispersed in a flexible rubber compound. Unfortunately, the rubber binder magnetised with ferrite powder was simply too weak to hold the foam timing blocks in place, and the cross draft generated from the cars going past at very high speed was enough to blow them over. A stronger magnet was needed with a lower sheer point that would hold the blocks in place during races, but release their hold in the event of a collision to avoid damage to the vehicles. Staff at Santa Pod contacted Eclipse Magnetics in search of an alternative magnetic solution, and Eclipse’s Technical Sales Manager Dr Ewan Goodier was able to offer his expertise.

Under normal circumstances, neodymium powder has a corrosion risk, but when suspended in a rubber binder it is effectively protected from corrosion. Eclipse Magnetics supplied the magnetic rubber in a flexible sheet form, which allowed Santa Pod to cut the sheet into strips depending on their requirements and glue this to the track using their own glue mastic adhesive. 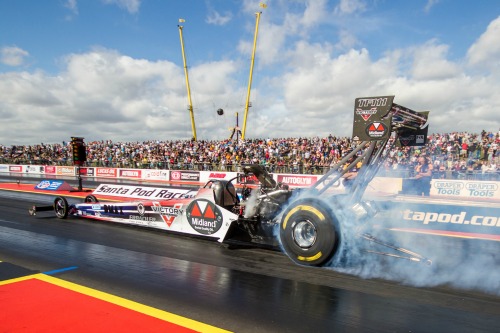 Neale Saunders from Santa Pod Raceway said: “The magnetic strips from Eclipse Magnetics have been a great solution. They fix the foam timing blocks to the track in such a way that they can be quickly released when it is time to pack up the equipment after a race. This is not only very convenient, but quick to do.

Racing has to stop when it rains, and the foam blocks need to be removed quickly so that we can dry the track with heated air jets and resume racing. The quick release nature of the magnets allows us to take away the blocks and put them back in a matter of minutes, making the whole process much easier for everyone.

When a vehicle does crash into the blocks, the magnets work perfectly in the way that they allow the foam blocks to spring back to accommodate the car in a way at that doesn’t damage the exterior of the vehicle, which is perfect for us and the drivers. The magnets work really well for us in this application, they’ve proved to be very successful!”

Find out more about Bespoke Magnets or contact us for more details.