Eclipse Magnetics Sponsored UWR to Compete in Praga Cup in 2022 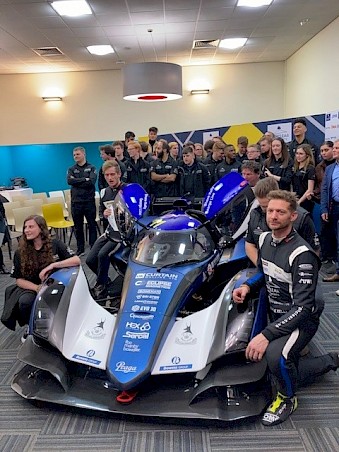 As long-term supporters of the University of Wolverhampton Racing, Eclipse Magnetics are delighted to announce it will be sponsoring the team’s latest venture in the Praga Cup.

Following on from the incredible success in the F3 Cup, it was sadly announced that the competition would not run this year due to a lack of participation. Whilst the news was disappointing, The University and the UWR Board took the decision to honour their commitment to the students and sponsors by racing in exciting, competitive environments that will also offer the best learning opportunities.

With this in mind, and after much research and consideration, UWR is pleased to announce that it will be racing in the Praga Cup in 2022 and beyond.

The Praga Cup is a single manufacturer racing competition that ran as part of the Brit Car competition in 2020 and 2021. Owing to the impressive speed and high profile of the Czech made racing cars, the number of Pragas has grown, giving the single-seaters their own competition in 2022 and a championship commitment to race in 2023 as well.

With a minimum of 16 cars in the competition, with the potential for as many as 20 on track, the Praga Cup is the perfect opportunity for UWR to continue to grow its profile, enable supporters to enjoy high-speed racing at the best circuits in the country, and help its students into the best employability in motorsport.

The Praga Cup is unique in the requirement for both a professional driver and an amateur driver needed to participate. It has been announced that UWR veteran driver, Shane Kelly, will take the wheel in the professional seat with George Line joining him in the amateur.

George is a fellow F3 Cup driver, with Shane and George in close competition during the 2021 F3 Cup. George finished 2nd in the F3 Cup Class, behind Shane.

George is not only a fast, confident and capable driver, he has also worked with UWR students in the 2021 season. George’s work ethic with our students closely matches Shane’s, and he’s an ideal addition to the UWR team.

While the outward appearance of the car is significantly different to an F3 car, the internal architecture has many similarities to the F3 and Formula Renault cars already in the UWR garage. While there will be a learning curve for staff and students alike, the team are confident that it can make a swift transition to the new competition and get some good results in 2022.

On the 2nd March, UWR revealed its striking new livery ready for the 2022 competition. Taking place at the university’s School of Engineering in Telford, sponsors and students were joined by former F1 driver and current Sky motorsport commentator, Johnny Herbert.

Looking to keep up with the Praga Cup this year? Find the racing calendar below!