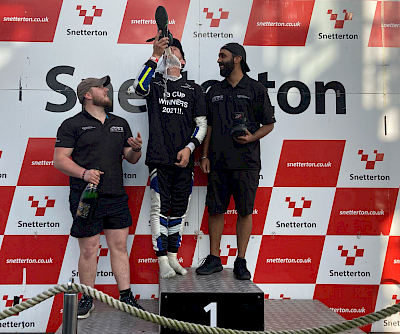 Having finished as runners-up for the title in the 2016, 2017 and 2019 seasons, and 3rd place in 2018, the student engineers from the Telford Campus of the University of Wolverhampton, as well as driver and team mentor Shane Kelly, wanted nothing more than to defend their lead and claim the championship.

After the triple class win at Donington Park only a week prior, the UWR F3 Cup team headed to Snetterton with a 40-point lead over their nearest championship rival and one hand on their first-ever class trophy and championship title.

Shane Kelly and the UWR team’s produced an impressive performance, delivering exactly what was needed at Snetterton. Qualifying in third position (P2 in class) for each race, Shane would only need to hold that class position for all three races to claim the title. Despite the temptation to push his University of Wolverhampton teammate, George Line, to secure race wins, the whole team knew that a safe and sensible drive was all that would be needed to concede the battle but win the war.

In Race 1, a clean getaway from the start line saw Kelly initially close behind Line over the first few laps, with less than a second separating the two University of Wolverhampton drivers until mid-race. With no apparent way past Line, Kelly eased off the pace, looking to preserve his tyres and engine for the next race. In the end, Line took P2 (P1 in class) and Kelly finished P3 (P2 in class). While this meant Line closed the points gap from 40 down to 33, Kelly was still comfortably on the top spot.

A poor start by championship leader Leaney gave Kelly an opportunity to get past Line, but the door was quickly closed as Line moved across to claim the racing line ahead of Kelly. With nothing to gain by trying to defend against the now 3rd placed, but significantly faster, Leaney, Kelly relinquished the number 2 spot and shortly after so did Line.

A gap had already opened between Line and Kelly, so with one eye on tyre preservation and the other on making sure nothing untoward would happen to cost him the championship, Kelly kept cool and finished the race in third place (P2 in class).

UWR’s lead was down to just 26 points, but as long as Kelly finished the last race of the day, and didn’t suffer a DNF, the Cup Class championship was in the bag.

As the F3 Cars lined up for the final time in 2021, the team took to the pit wall to watch the race while our sponsors and guests watched from the hill overlooking Agostini and the Bentley Straight.

Kelly’s task looked relatively simple – keep the car on the track for 15 minutes. As the lights went out and the grid got away for the final time, Kelly began the most careful race of his career.

Starting in P3 on track, he kept the Dallara F308 light through bends and straights of the circuit, not challenging Line or Leaney ahead of him. As the minutes ticked by, each successfully completed lap was greeted with a cheer by the students who had worked so hard to prepare the car for this moment.

Kelly ensured his driving was safe and controlled allowing Tony Bishop, who began the race in P4, to pass with just 3 minutes left on the clock knowing that the 2017 car would have no effect on the championship standings.

As the number 11 car appeared over the crest of Coram, exhalations of relief turned to cheers and hugs of celebration as Kelly crossed the line P4 on the road (P2 in class) and the 2021 F3 Cup Class Champion.

A team who started the season with only 4 people allowed in garages due to COVID-19 erupted into well-earned celebrations, with Shane Kelly and lead students Calum Bach and Sundeep (Sunny) Motay drinking champagne from Kelly’s flameproof driver’s boot in tribute to, F1 favourite, Daniel Ricciardo’s “shoey”.

From everyone at Eclipse Magnetics, we’d like to wish the UWR team a huge congratulations on such an impressive season and here’s to many, many more!